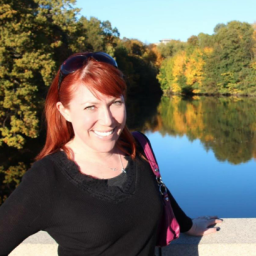 Allow me to set the scene. When my alarm goes off at 6am in my Jamala Wildlife Lodge bungalow I’m not ready to get up, but knowing breakfast and a backstage tour of Canberra National Zoo are waiting, I force myself to hop out of our four-poster canopy bed and make my way into the bathroom.

It’s barely light outside, but I can see the shapes of lions outside our floor to ceiling windows as I reach out to turn on the bathroom light. Then it happens.

One of the lion shapes comes to life and bounds across the enclosure, leaping into the glassed off section in the centre of our bungalow and roars at me.

He’s only inches, and thankfully some very sturdy glass, away from where I’m standing, and as I lower my astonished face to his huge one I find myself looking into the eyes of a very vocal lion as he continues to roar.

My friend Scott and I are in such shock we just stare, completely missing the chance to grab a camera before he decides he’s made his point, flicks his beautiful mane and stalks away.

While there are a number of zoos that have sleepover options, Jamala Wildlife Lodge takes the concept to another level.

The latest creation from Canberra’s National Zoo and Aquarium owner Richard Tindale and his wife Maureen, Jamala has a series of luxury bungalows that are built at the edge of the zoo’s animal enclosures. Once you walk in your front door you’re sharing a glass wall with lions, tigers, bears, cheetahs and other animals, which are attracted into a den like section of your living area by heated pads.

As well as the bungalows, guests can choose to stay in giraffe tree-houses, which have a balcony that meets the giraffe enclosure on one side, and a petting zoo with alpacas on the other, or they can also opt for rooms in the main building, uShaka Lodge where the aquarium’s sharks swim past your room.

Every room is filled with beautiful African artworks, sculptures, and masks that Tindale and his wife have sourced from around Africa, and the bathrooms are stocked with Molton Brown products.

With its luxury lodge feel this would be a beautiful place to stay even without the animals. But we all know who the real stars are and the team at Jamala enjoy making the introductions.

There are two guided tours of the zoo, the afternoon tour takes you around the existing zoo, while the morning one that provides a sneak peek at the new area that will be open to the public later this year.

Along the way there is the chance to pat and feed some of the residents, including reaching out to rub the skin of three gentle white rhino that have yet to go on display.

At the evening pre-dinner drinks you can sip Moet & Chandon as you watch snow leopards and hyenas enjoy their own food.

And while there’s never any guarantee animals will come and say hello, seeing fully grown white lions appear in the corner of the dining room, and then roll around like kittens behind the glass is something I’ll never forget.

I was even won over by the hyenas, creatures I’d found quite scary and disturbing in the past, after a couple of them come up to the glass and work their charms over breakfast.

Speaking to Tindale about his love for animals and how the zoo has grown is both entertaining and inspiring.

Tindale and his wife bought the zoo in 1998 when it was barely more than a rundown aquarium and lived in what is now uShaka Lodge with their six children, three of whom now work in the zoo as adults.

The family is focused on animal conservation, and as well as working with breeding programs, Tindale has rescued bears, leopards, lions and monkeys from circuses.

He has also helped other people rescue animals in dire situations, including one of the zoo’s Malayan Sunbears. Otay had been locked in a small cage in Cambodia when she was a baby after poachers killed her mother. She was being kept alive only until she was big enough to be taken to a restaurant and killed, but when Free the Bears founder Mary Hutton asked Tindale if he could look after her, he stepped up.

“We knew it would be a lot of work but we introduced her to our male, who had his own unfortunate background with melanomas,” Tindale explains. “But they came together, had a baby which we named Mary and is now in Taronga Zoo as part of their breeding program.”

I have to laugh when Tindale tells me that my Jungle Bungalow with the lions is “the best and the worst place to stay”.

The best for those who love the kings of the jungle and want to be able to look at them all night. The worst if the lions decide to start roaring loudly at 3am, which is something they are prone to do.

I never travel without earplugs and am happy to take my chances. As it turns out, they do roar a little but I love lying in bed and listening to them, and find it easy to get back to sleep.

The biggest roar of all was saved for that early morning bathroom light. I don’t blame him. Early mornings are no fun if you’re a party animal who’s been up all night. Next time I’ll stay for two nights so I can skip one of the early starts and just spend the day in bed watching him and his lion friends do the same.

Amanda Woods stayed as a guest of Jamala Wildlife Lodge but all thoughts and opinions remain her own. Read more at http://adventuresallaround.com/